Walking with the Rhinos

Walking with the Rhinos

On our trip to the Serengeti, the only one of the so-called big five that we didn’t see was the rhino. Today, we fixed that.

Our flight yesterday from Addis Ababa was smooth. We saw the outlet of the White Nile from Lake Victoria, so check, both sources of the two branches of the world’s greatest river sighted.

Ali, our driver/guide for the Uganda leg of the trip, meet us at the airport and took us to the lodge where we spent the night, 5km north of the equator.

6am start this morning, to beat Kampala traffic. I suppose we mostly beat it, but we did hit some jams. Eventually, we broke free and made good time on the good quality highway. Mostly midwest-straight, he often cruised at about 70mph. After three hours, we turned off the road into Ziwa rhino sanctuary.

Rhinos went extinct in Idi Amin times, and by 1983, they were wiped out by poachers. In the 1990s, when stability returned, the sanctuary was established with 2 white rhinos, a gift from Kenya. They got two more from Disney’s animal kingdom in Florida, and later 2 more from Kenya. This group has been breeding, so now they have 25. One, with a Kenyan father and American mother, is named Obama.

A group of six of us, along with two rangers, walked out into the bush looking for rhinos. Before long, we found a mother and her nine month old baby, grazing. We got pretty close, and the mother was aware of us, but kept eating. Eventually, they went under a tree and lay down for their siesta.

We went a bit further and found three more snoozing in the shade, a mother with two babies, one adopted.

After we left the rhinos, we stopped for lunch, then drove on. The roads and traffic are much more rational than in Ethiopia, nevertheless, we had a close call when a motorcycle, evidently trying to avoid cows on the side of the road, served into our lane. Ali hit the brakes and served right while the bike swerved left and missed going through our windshield head-on by about 6 inches.

All along the way, we passed broken down trucks. Mayb 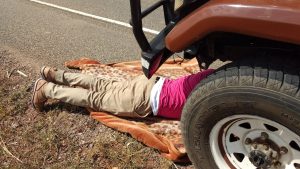 e eight of them. Then it was our turn. While passing another car, our front end started vibrating like crazy. Ali was able to pull over to the side of the road. We were standing in 95 degree sunshine. He jacked up the front, found that the tie rod was loose, tightened it up and we were off again.

We are staying in a very rustic lodge overlooking the Nile, really the northernmost tip of Lake Albert. Electricity is off until 6pm. The fan in our room only runs for 20 minutes. It’s hotter than hell, probably 80 as I write this at 8pm, low expected to be 76 overnight. They have solar heated water and warned it doesn’t get too hot and may be done by morning, but we took cold showers anyway, The cold water is about 75 degrees.