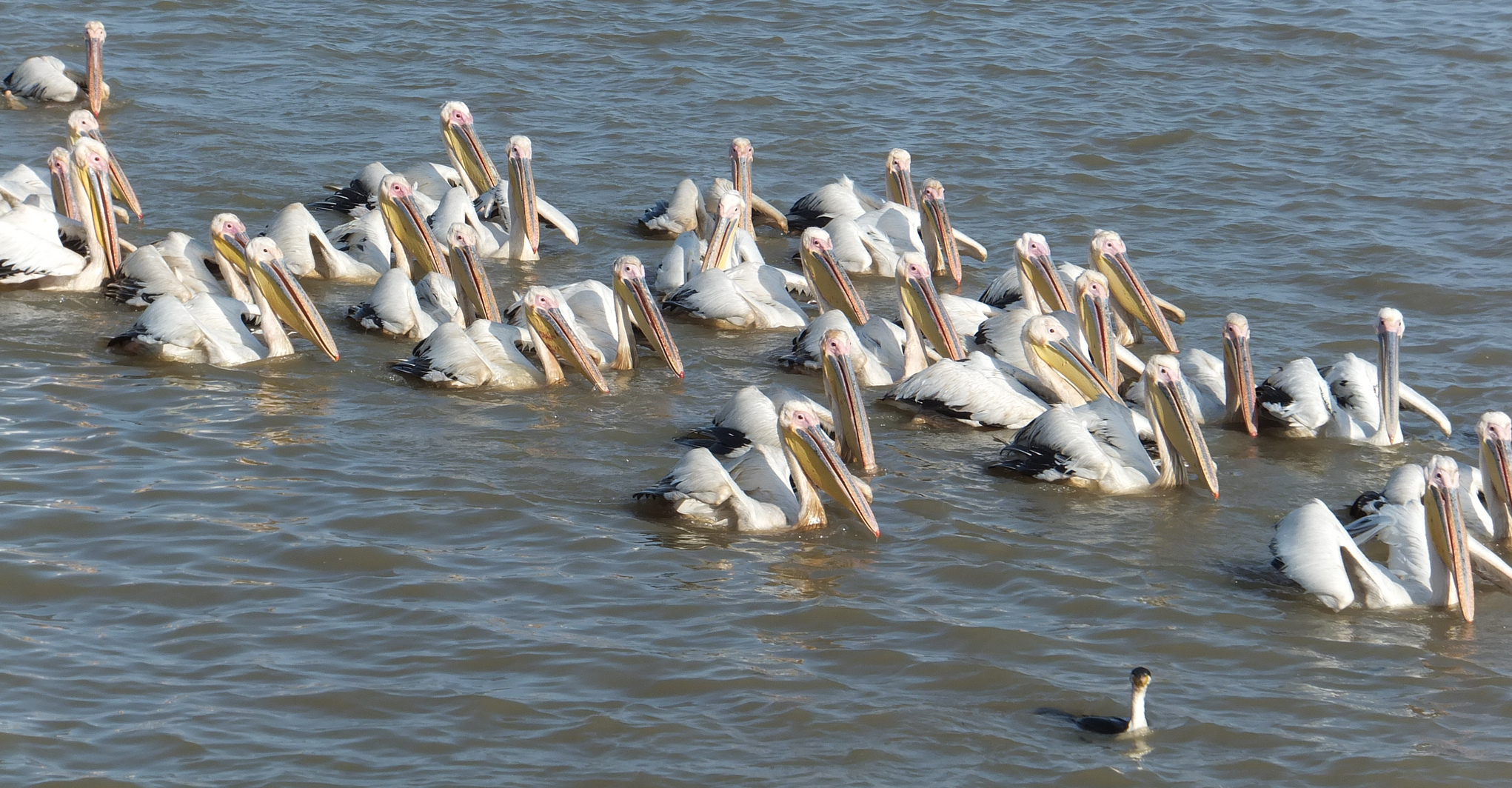 Ismaila, the guide we met on the boat, who drove us up here to St. Louis, picked us up at the hotel at 8am. He was out on the street and introduced us to Nicholas who was coming with us to the Djoudj bird sanctuary. Turns out Nick is a New Yorker, living in London, who flew to Dakar and came straight to St. Louis. Brave guy drove himself in a rental car.

We all piled into a taxi for the 60km drive to the sanctuary which is on the Mauritanian border. Along the way we saw three Mauritanians by the side of the road. Djoudj is 160 sq kilometers of wetland, the third largest bird sanctuary in the world, a Unesco World Heritage site (as is St. Louis). It is the first body of permanent water south of the Sahara, so the birds that migrate from Europe stop here. Intrepid bird kooks can venture into the back tracks of the park with a guide, but we casual tourists take a two hour boat ride. Ismaila got us front row seats in the boat and we waited for several cars and a bus of other tourists while watching a flock of pelicans, like synchronized swimmers, diving for fish. Also cormorants, ibis, including “sacred ibis” down from Egypt, small herons, cattle egrets, ducks, water chickens (that’s what Ismaila called them in Spanish, “pollos de agua”. They looked like chickens) and other small birds that the intrepid bird kooks could have identified if they weren’t off on the back tracks. We were pretty impressed. How naive we were.

The boat took off and headed up a channel in the marshy swampland. All sorts of birds were flying along in various formations. As we came around a bend there was a flock of pelicans, hundreds of them, diving for fish. As the boat approached, they started taking off, flying all around as did the cormorants and other birds. It was like a ballet with a thousand birds of various colors and sizes, flying all around, landing and taking off again, as the boat moved among them. Eventually we got to the nursery where vast numbers of juvenile pelicans, about the size of chickens, and all black, were waiting for mom and dad to return with breakfast. The ballet continued all around.

Suddenly one of the guides yelled and the boat pulled over to the side where a crocodile lay half-submerged. Everyone stood and snapped photos until he slunk off behind a bush. Ismaila said it was the first crocodile that had been spotted in ten days.

Eventually the boat headed back. As we got out, someone spotted a snake in the reeds at the waters edge. Driving out we saw warthogs and a single monkey.