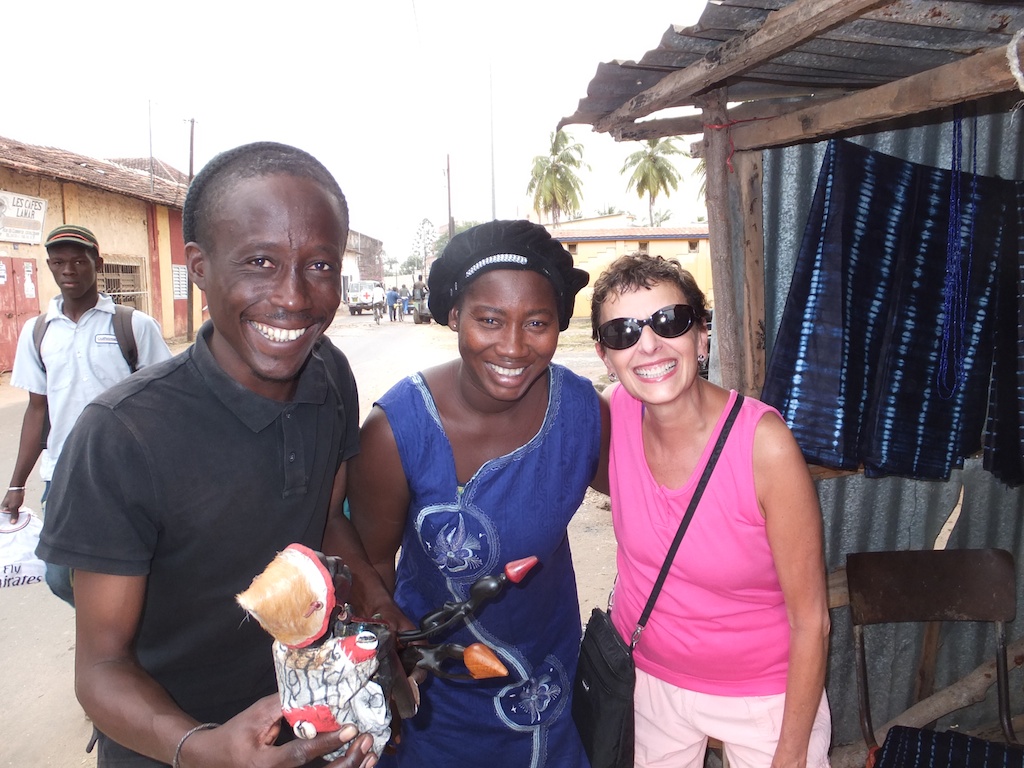 The Good, the Bad, the Ugly

The Good, the Bad, the Ugly

Yesterday started out nice, descended into endless discomfort, and only now, 28 or so hours later can we glimpse a return to stability somewhere in our future.

Yesterday morning, we walked from the hotel down to the boat dock to confirm the timing of the ferry departure back to Dakar. We had an eye out for a street vendor we had dealt with the day before, because we wanted to buy more of his stuff for gifts. Nearly back at the hotel, he jumped out, and greeted us and that bargaining dance that Maria loves and that she is so good at, began. This all happened on the turf of another vendor, Fatima who has a little shack, where guy #1 just walks the street with his wares in a backpack. So she came out and got into the act. She spoke Spanish, so it got pretty chaotic. At the end, everyone was pleased, which of course is the goal of successful negotiation, and posed for a picture. Fatima was so enthusiastic, she kissed Maria and screwed her into her armpit for the photo. 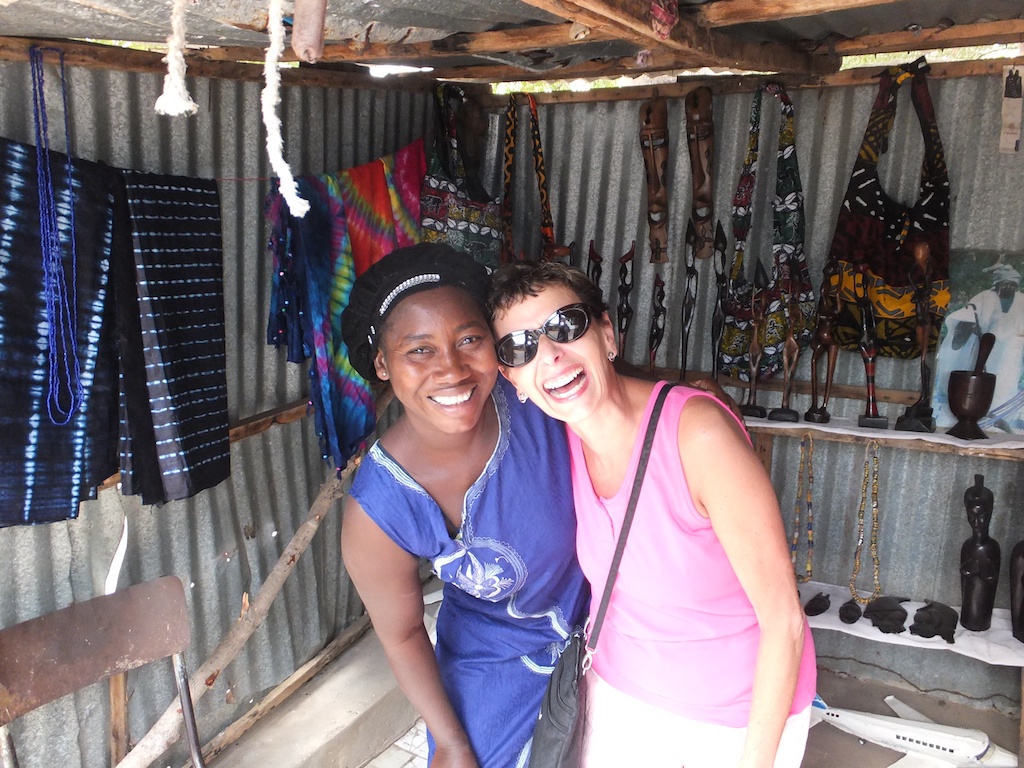 Back in the hotel room, Maria fussed around trying to get Fatima’s strong BO off her shirt. 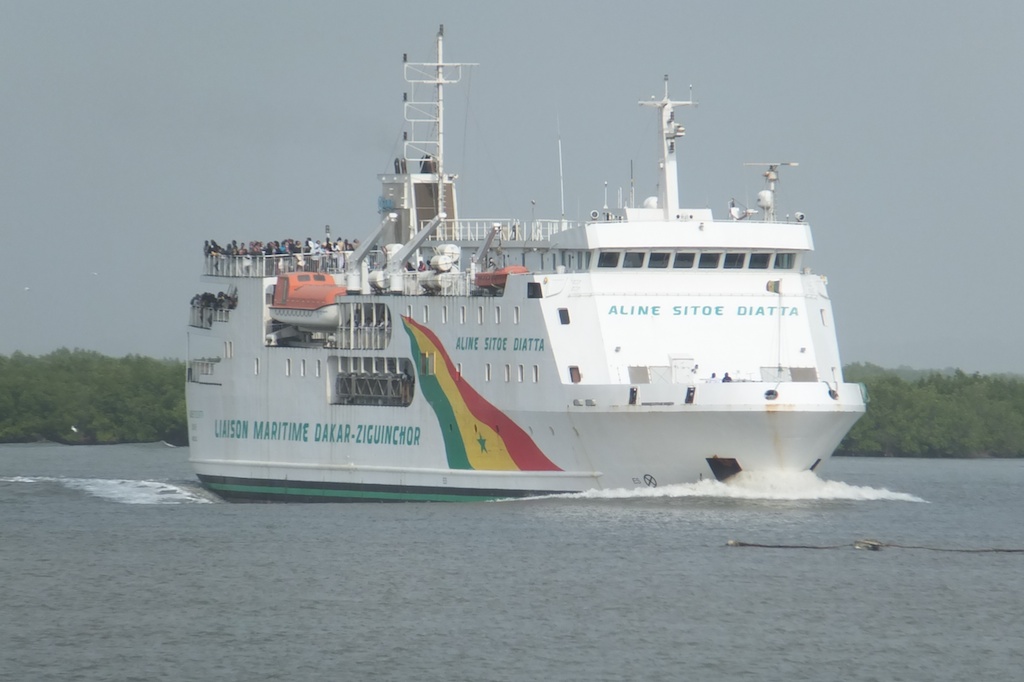 We checked out, got a cab to the ferry, went through a lighter version of the security and identification rigmarole and found our cabin. 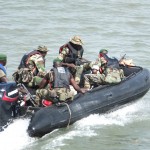 We then went up top to watch the cargo loading, and after that circus completed, the boat took off down river towards the Atlantic. The river portion of the trip was interesting. We were escorted the whole way by a rubber Zodiac carrying armed military guys. We passed little fishing shacks out in the mangroves that line the river, passed several small riverside towns, and, 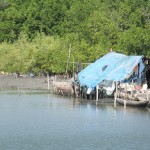 as we got close to the sea, dolphins appeared and played in the boat’s wake. Around sunset, we reached the open ocean and the swells began. We thought we were smart, while still on the river, we went to the infirmary and got Dramamine. We were doing okay, and went to the cabin and laid down waiting for the restaurant to open at 8. The restaurant opened, we sat down, still okay. The tables were all for 6, so another couple, business associates it turned out, sat next to us. We introduced ourselves and it turns out the man, Ismaila, was a Spanish-speaking tour guide who had just put his group on a flight back to Madrid and was going home to…St Louis, which was our destination! We told him we were going to try to get a car at the transport station, and he offerred to drive us. We made arrangements to meet the following morning and our entre, fish, arrived.

The smell of the fish indicated it was old and instantly set us both off. We paid the bill, excused ourselves and ran back to the cabin in seasick misery. Laying in our bunks moaning, Maria could not stop thinking about the Jolla. In 2002, the grossly-overloaded Jolla was a ferry making the same journey we were, from Ziginchor to Dakar. It capsized off the Gambia coast and thousands died, the second worst maritime disaster in history – the Titanic is in third place. We walked past a decaying run-down memorial on the way to the boat. The ocean swells were worse than on the trip down, and Maria was convinced we were going to capsize. Every time a little wave lifted the boat and it slapped down into the next trough, Maria envisioned The Perfect Storm (during proof reading Maria insists these were big waves!) We heard people throwing up left and right all night. We had a miserable, sleepless night until the boat docked in Dakar at 6am.

We tracked down Ismaila who had a driver waiting for us, and we all took off in the predawn hours for the 4 hour ride to St. Louis. We dozed for the first couple of hours, then woke to empty stomachs and endless dull flat sandy countryside with a few trees, punctuated by run-down, trash-strewn towns that were just waking up and getting going. Trash, lots of plastic, everywhere. Fly-blown meat in the sun. Some of these run-down towns had new construction that looked worn out even before it was done. A definite “where are we and why are we here?” moment especially given our disorientation. At this point Maria said, “Good thing Tim and Anne didn’t come with us!” On the bright side, it was market day in one of the towns and we saw carts pulled by donkeys, laden with goods and people on their way to market. We saw a cart full of women wearing their brightly colored, nice clothes, pulled by a donkey, with one woman talking on her cell phone. We also passed another town in remarkably better condition that Ismail said was the home of many of the Senegalese who sell stuff on the streets in Europe. The good condition is because of their remittances.

We got to St. Louis, and for some reason, the driver had to swing through the Gare Routiere (transport center) to drop off some paperwork and we got to have a look at the crazy chaos that we would have had to deal with in Dakar to arrange our own transportation. Thank god we met Ismaila.

Our plan here is to see the Djoudj bird sanctuary, the third largest in the world. We had planned to join a tour, likely French speaking, but Spanish speaking tour guide Ismaila will take us there tomorrow.

Our hotel here, the Siki, is run by a Spanish woman and is quite nice, and if the tapas we had for lunch are any indicator, the food is excellent. We took a short walk around town in between naps and recovery. We inquired if there was a plane back to Dakar, but the airport, Africa-style, is defunct. All the way out we followed train tracks that had trees growing between the tracks… The hotel arranged a car to take us back, it should be a better ride after two nights of sleep.

With the benefit of hindsight, I would definitely arrange things differently including not attempting the whole length of Senegal from the southern to northern borders by surface transport in a single day.

We are still swaying from the boat…