Everywhere we go, we see men with guns. Municipal police, Federales (“we don’t need no stinkin’ badges”) and marines, walking the streets, or riding in trucks, all carrying U.S. supplied machine guns at the ready. Off on an isolated stretch of Balandra beach, we encountered 4 marines in full battle gear, helmets, boots and of course machine guns, walking the beach. Maria asked “aren’t you hot in all that clothing?” to which they replied, “Nah, we’re used to it”. 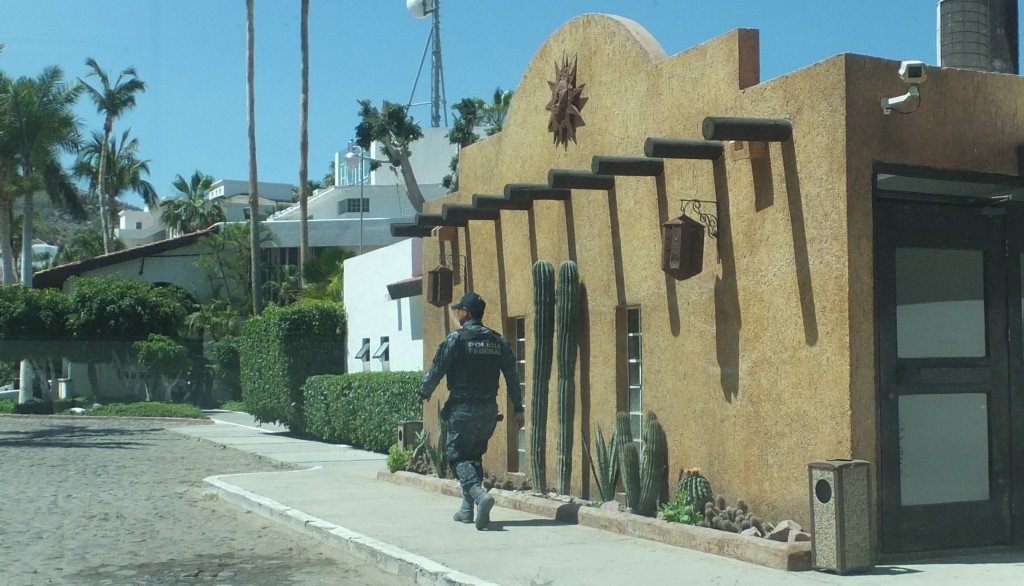 There is a contingent of maybe half a dozen Federal police stationed at the hotel. Sometimes they are in the halls. All young kids of course, playing with their cell phones. We went to the spa for massages today, and the woman there told Maria that they have been here since the hurricane. Probably originally to stop looters, but now serving no obvious purpose. Spa lady said “they’re on vacation”. Every time we’ve driven in the hotel gate, they have never looked up from their cell phones. We saw one laying down on the grass in front of our room. They all seem nice enough, we don’t detect that brotherhood-of-heroes-everyone-else-is-a-threat attitude that dominates U.S. police.

We visited our two beaches for the last time today and at both found lots of families enjoying themselves. I thought it might be ’cause today is May 1, International Workers’ Day. Or maybe they were all celebrating Chiyo’s birthday. It turns out the teachers are all on strike, now going on eight days (Maria’s massage finished earlier than mine, so she was able to catch up on all the local gossip with the spa lady).

Seafood again tonight, a second visit to the best seafood joint we’ve found. Then a three hour drive tomorrow to San Jose del Cabo where we’re staying in an AirBNB.