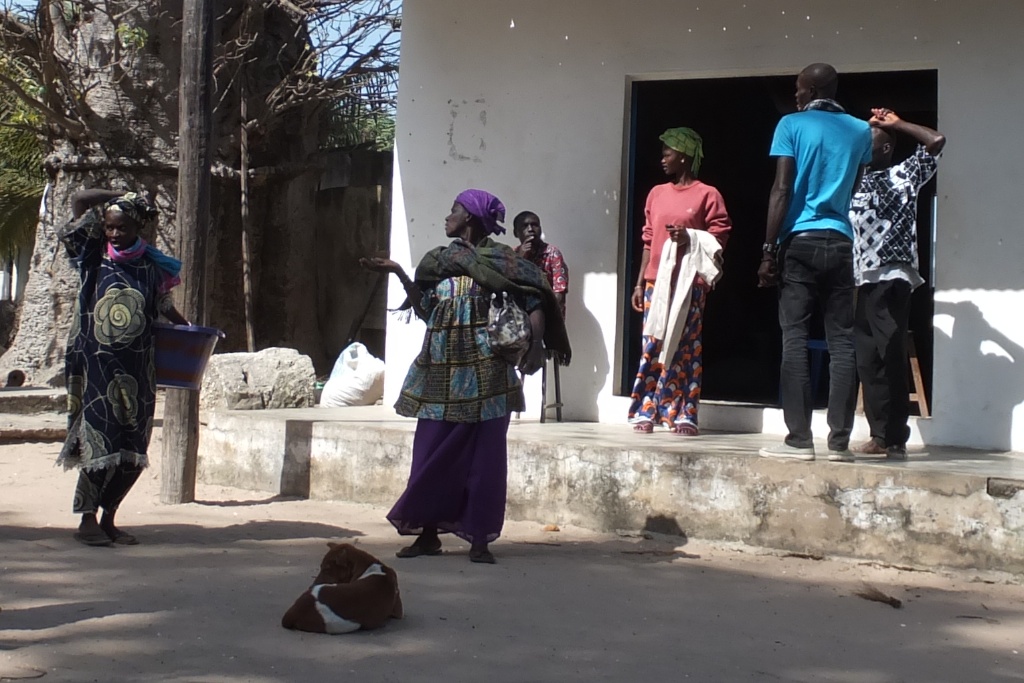 We are staying at a little hotel 2 miles off the main road, which itself is pretty deserted.  Nearby is a village called Diembering.

We could almost walk there, but didn’t want to just show up and walk around town. So the bartender here at the hotel, Aliou, arranged for a taxi to take us.

The driver picked us up this morning and took us the few kilometers up the road to the village.  The road ends at a big tree which is a central meeting point for village festivals and such. 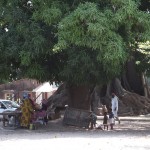 There, the driver, whose French sounds like it’s as bad as mine, took us into a little building that had a sign out front that said “wifi” and there was a guy on a laptop. He introduced himself in English, his name is Albert. He runs a little school so kids can learn to read and write the Diola language – I guess they learn only to read French in school.  Albert is also a Pentecostal minister. He asked if we wanted him to 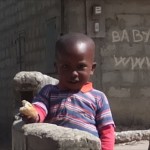 show us around town, and we got the best tour, meeting lots of the people, seeing their houses and learning about their agriculture. We took a lot of photos, discreetly, from the hip, so not sure how they’ll turn out.  We met a guy named Joseph who was happy to hear that my father’s name is Joseph. Maria thinks he looked like he was 100 years old. 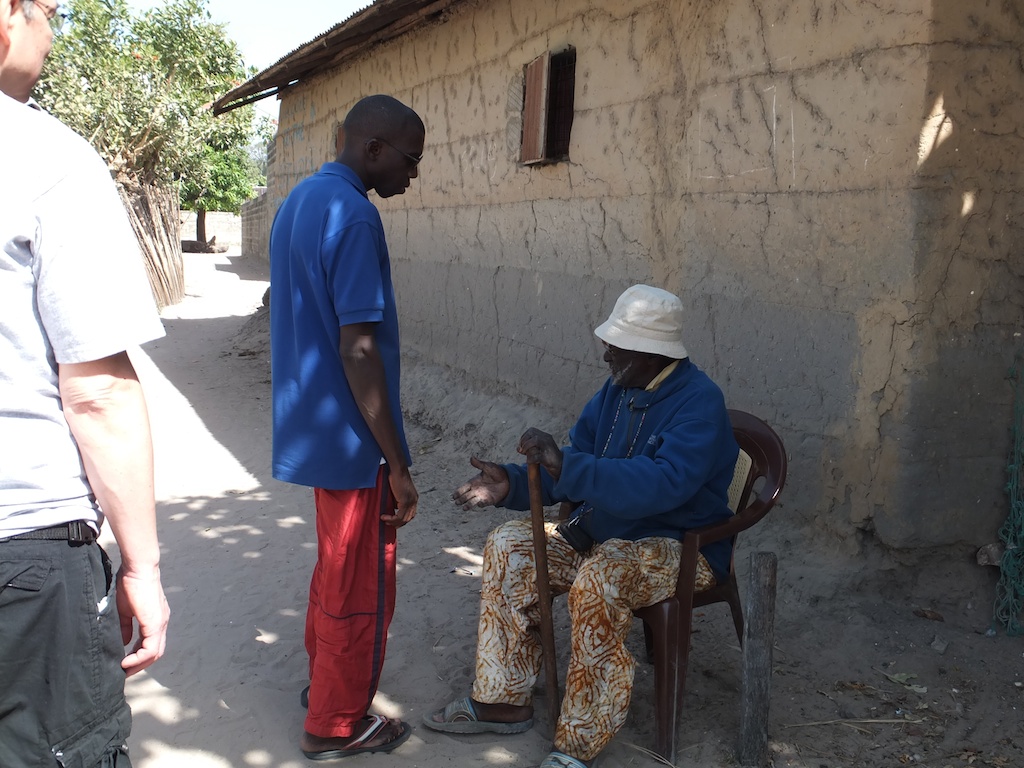 When we said goodbye, we exchanged email addresses with Albert. The Internet appears to have penetrated some pretty remote places. Across the road from Albert’s place is the Orange office, they are the main cell and Internet provider.  Everyone here has cell phones.  Africa is skipping the wired phone stage and going straight to wireless – it’s a lot easier to put up cell towers than wire everyone’s house. As Simone said when I told her this, “So by being behind, they’re getting ahead.”

We’ve been walking on the beach several times a day. Of all the beaches we have visited, this is one of the best. Soft white sand, pretty much deserted (on a typical two mile walk, we’ll see one or two people), very wide and flat, pretty good surf, we’ve seen a couple of surfers, and lots of interesting shells.  This afternoon, we walked a pretty long way and encountered these guys collecting shells on an industrial scale.  They stood in the surf with buckets 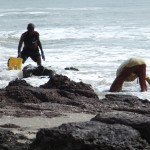 with holes in the bottom, straining shells from the sea and dumping them in big (3 feet high) piles.  One guy, Mustapha, came up and started chatting with us. When we told him we’re Americans, he switched to English and explained that they sell the shells to construction companies who use them to pave courtyards and driveways. Our hotel has a shell driveway. Mustapha came from Guinea Conakry, two countries away, to collect shells on the beach.

In West Africa alone there are hundreds of languages and dialects. The people here are good linguists. Mustapha, a laborer doing pretty menial work, can speak French, English, his native language, and who knows how many other African languages. 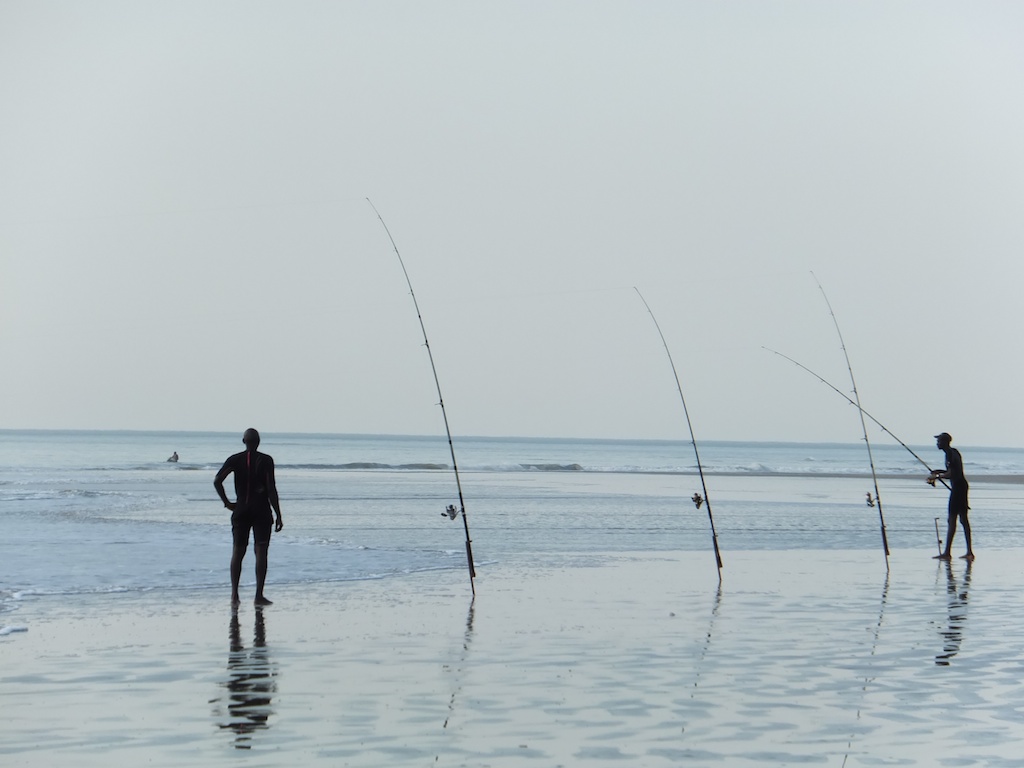 Last night on the beach we watched guys surf casting for fish. That’s where dinner comes from. 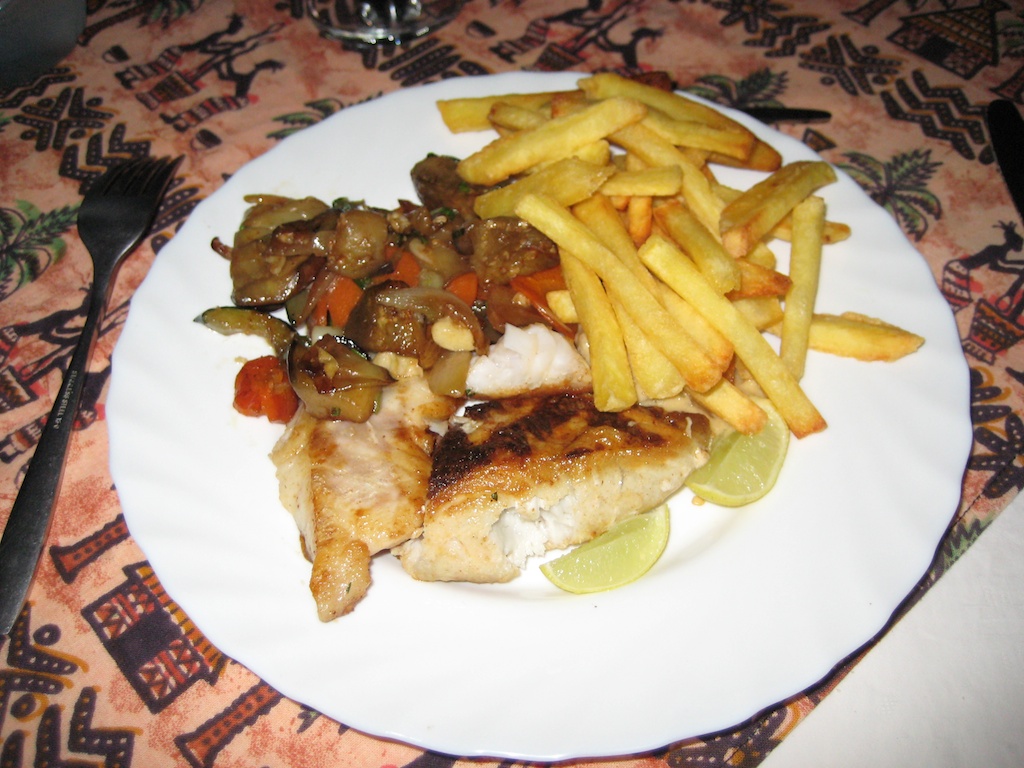