Roads are decent and have steadily improved over the years.  Try not to drive at night because the roads are not well lit, the country is mountainous with frequent, unguarded, high drop-offs that you don’t want to discover the hard way in the dark and you’ll miss the beautiful scenery.  Night driving in the towns and on the coastal roads is fine.

Be good with a map.  You can get an offline map app for the iPhone / iPad: Maps With Me.  It’s free.  You’ll have to download the Costa Rica map, which has good detail.  No “current location” unless you are connected to Wifi.  Supplement with a paper map.

GPS could be useful.  I am a Luddite when it comes to GPS, but in Costa Rica I’ve had the advantage of travelling with my mother-in-law who, as a young girl, travelled all around the country on horseback.  We’d be in the middle of nowhere far from home and she’d say, “Turn left here” and would always be right.

A big problem adventure is none of the streets have names and none of the houses have addresses.  The maps say they do, but none are marked and nobody on the street knows the names.  My in-laws live, according to Google Maps, on General Eloy Alfaro, Calle 1.  But without a doubt, they have never heard this name.  Their address for taxi drivers is “300 meters north of where the old San Rafael Hospital used to be”.  Observation of landmarks and dead reckoning is a must.  Or ask.

I don’t know if English is widely spoken.  I’m sure that hotels have English speakers and probably restaurants.  Tour guides of course. The car-rental guys have been 50-50.  Don’t know about the average person on the street, but I’ll bet Spanish is more common here than English is there.

On arrival.  The San Jose airport is the only place where we have seen duty free on arrival! Just before you get to baggage claim, there is a duty free store.  And the prices are really good, around half of what we would pay in the liquor stores here.  We stock up here with gin and Cuban rum at rock bottom prices as the local cocktails are made either with locally distilled (pretty bad) liquor or super expensive imports.  Decent wines here, too, wine is generally mistreated and expensive in restaurants.  We usually buy the liquor we are planning to take home at this time too, so we can pack it into the suitcase before we leave.  We do have the advantage of being able to leave it at my in-laws’.  Otherwise, if we followed the standard buy-duty-free-in-the-departure-lounge, when we clear customs in Miami, we get thrown out of the secure zone and have to re-enter.  So we need to open the suitcases, put in the liquor that was delivered to us on the plane before we re-check.  Or get it confiscated at security.  So we buy at arrival in CR and pack it before we leave.

We highly recommend Pura Vida Hotel http://www.puravidahotel.com/ in Alajuela, near the airport, for the first night, and last nights.  It is run by Berni and Nhi, expats from California (originally London and Vietnam), who are knowledgeable and friendly.  And Nhi is the BEST cook in Costa Rica. 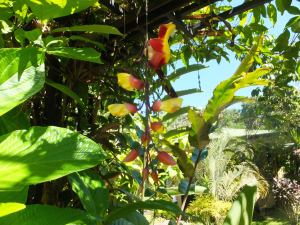 We’re looking forward to Thanksgiving dinner there.  They have casitas, little houses, on their large, beautiful property.  Views of the Poas volcano, free taxi from the airport, delicious breakfast of yogurt and large fruit plate is included, and they can arrange for a rental car to be dropped off at the hotel.  They have a couple of gigantic, very friendly German shepherds.  Request the Katydid casita, two bedrooms, two baths, nice sitting room, kitchenette, and close to the car park so easy to haul luggage when you leave.

Car rental.  We have always used Toyotarent https://www.toyotarent.com/ which has good cars and excellent service.  But they are getting expensive. Talk to Berni at Pura Vida, he can arrange a car for you, just say what kind of vehicle you want and they’ll deliver to the hotel.  Toyotarent has all Toyotas, all late model.  We’ve usually gotten a 14 passenger van to haul everyone around, or a RAV4 if Maria’s sister’s family doesn’t come.   In June, Maria backed her rented Corolla into a tree, causing a couple of hundred dollars damage.  They hit her credit card for the damage (per the agreement as she had declined the exorbitant collision coverage), and then were very cooperative working with our credit card insurance coverage, who just reimbursed us last week.  They are expensive, you can certainly find cheaper, but we have heard painful stories.

Food.  The food in Costa Rica is pretty unimaginative.  But it is generally safe to eat and the tropical stay-away-from-salads rule does not apply.  In all our trips, only once did anyone get sick, and that was Maria, no one else.  Rice and beans with every meal of course, and some good fish and seafood on the coast, but not any national cuisine to be proud of.  Pork and chicken are usually good, beef is tough and overcooked.  Our vegetarian niece was always able to find nourishment.  Lizano sauce is a cumin-based sauce that is good on lots of things, especially eggs at breakfast.  Lizano can go anywhere ketchup goes.  Wine anywhere except at Pura Vida is expensive, treated pooly can pretty much be skipped. Simple cocktails, like Gin and Tonic are not bad.  The Imperial and Pilsen national beers are fine and our usual beverage of choice in restaurants.  There are good supermarkets for stocking up on staples.  Prices are like here.

Fresh fruits are widely available and really good.  You can stop at fruit stands which are generally decrepit-looking shacks, or even individuals selling fruit on the side of the road and find nice stuff.  Another roadside treat to watch out for is Pipa, coconut water, served frequently cold in a plastic bag with a straw, or sometimes right out of the coconut.

Coffee of course is always good.

Money.  ATMs are readily available.  You can get either Colones or dollars from the ATM.  Dollars are generally not necessary.

Safety.  San Jose in general is nothing more than an ugly nuisance to drive through.  It has a high-crime reputation, but my observation is that Costa Ricans like to brag about how dangerous the country is getting so they can feel like tough survivors.  Theft from parked cars is supposedly pretty high and it’s best not to leave anything in sight, but we’ve never met a victim.  The legend is that Colombian criminals come up to CR for easy pickings – not having an army, Costa Rica’s police, unlike the standard former-military, are not regarded as tough guys who like to fight.  I think there is a lot of urban legend at work.  We have always felt safe.

Poas Volcano is an easy drive from Alajuela.  You look down on the crater, which is active, often with steam coming out.  It’s apparently been quite active lately.  http://www.puravidahotel.com/index.php/activities-and-tours/poas-volcano.html

Britt Coffee Tour is a kitchy but fun couple of hours in San Jose.  If you miss it, no big loss, but if you find yourself looking for something to do: http://www.coffeetour.com/

Arenal Volcano is a 5500 foot classic cone in the northern part of Costa Rica.  One of the most active volcanos in the world.  Walking around the base, we’d hear rumbling and “click click click” as rocks thrown out of the crater landed high on the summit.  We saw glowing from the crater at night.  Nearby are hot springs.

The closest town is La Fortuna.  Recommended hotel is The Arenal Observatory Lodge.  http://www.arenalobservatorylodge.com/index.php  We have relatives in La Fortuna with whom we stayed, so can’t personally vouch for the hotel.

Monteverde Cloud Forest.  My sister worked as a volunteer here 10 or 12 years ago.  It’s about 12 miles as the crow flies from Arenal, but 117 KM by road.  Rainforest, natural beauty, lots of wildlife.  http://www.monteverdeinfo.com/  We have not stayed here, and my sister stayed with a family.  So you’re on your own for a hotel at Monteverde.

The Beach.  The Pacific coast is readily accessible. Lots of surfing.

The Nicoya peninsula is very rustic.  It’s pretty far.  We rented a house on the beach in Playa Hermosa, it was an idyllic 3-4 days, but a looong drive.  Also at the southern end of the Nicoya peninsula, we have been to the Barcelo in Playa Tambor, a terrible all-inclusive resort that my father-in-law wanted to go to, and that is now the butt of ongoing family jokes.

Now, because of its proximity to Alajuela, we go to Jaco, which is about as far as the aging in-laws can travel.  It’s the busiest town on the Pacific Coast, lots of drunk American guys and the accompanying hooker population, but we have found a nice hotel at the far end of the beach that has peace and quiet.  Can’t recommend Jaco.

Further down the coast, however, is Quepos, which is a nice little town, close by the Manuel Antonio National Park which has a very nice beach.  We stayed at Playa Bejuco http://www.hotelplayabejuco.com/  a small place right on the beach.  Here we arranged a boat tour through mangrove swamps with lots of wildlife, including monkeys. The spider, as big as my hand, was on the grounds of the hotel 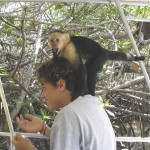 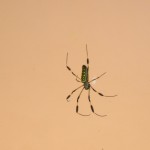 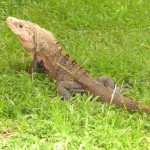 It was here that we also ended up on a 12 passenger boat to see dolphins and do some snorkeling.  The other passengers were Pink, her then-husband and her parents.

Stay away from Puntarenas.  It has nothing to recommend it.  At least Jaco has some good restaurants.

The Caribbean.  This is a long way (5+ hours from Alajuela), and off the beaten track, but the Caribbean coast is nicer in many ways than the Pacific.  The beaches are clean, white sands and blue Caribbean water while the Pacific is gray and colder.  The Caribbean side is quite undeveloped.  The population is largely black, English-speakers originally from Jamaica. 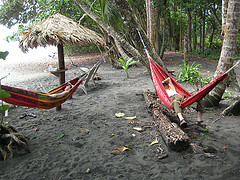 Also more indigenous people than we have seen elsewhere in CR. There are some nice spas, some nature sightseeing, really good unrefined chocolate and lots of laying around to relax.  We stayed in a really nice B&B, the Banana Azul, in Puerto Viejo, right on a beautiful, deserted beach, run by two Americans. http://www.bananaazul.com/.  We stayed in the Treehouse, which is completely open, high in the trees.  We worried about mosquitos, but they said the mosquitos don’t like the salt air and though there were mosquito nets, we didn’t need them.  We woke one morning to find a dog sleeping on the floor at the foot of our bed – that’s when we realized what the gate on the stairway was for.

Day 1. Arrive.  Stay at Pura Vida.  Relax and unwind, have a glass of wine and enjoy the gardens.  Review trip details with Berni.

Day 2.  Wake up early for trip to Poas Volcano, arranged ahead of time.  Return late morning.  Get rental car and leave for La Fortuna and Arenal.  Drive 2-1/2 hours to La Fortuna.   Watch Arenal volcano at night from afar, pretty cool if it’s erupting.

Day 3. Hike at the base of Arenal.  Take a dip in the hot springs.  Dinner in town.

Day 4. Leave early for Monteverde.  Hiking in the rainforest.

Day 5. Up early for Monteverde exploring in the morning.  Leave by noon for Quepos.  Drive 3-1/2 hours to Quepos.  On the way, stop at Tarcoles to see the crocodiles from the bridge – recognizable because there will be lots of people on the bridge. 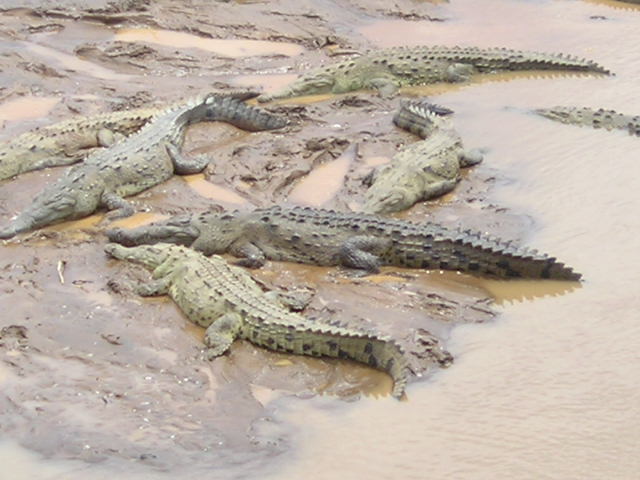 Day 7. Drive back to Alajuela and Pura Vida.