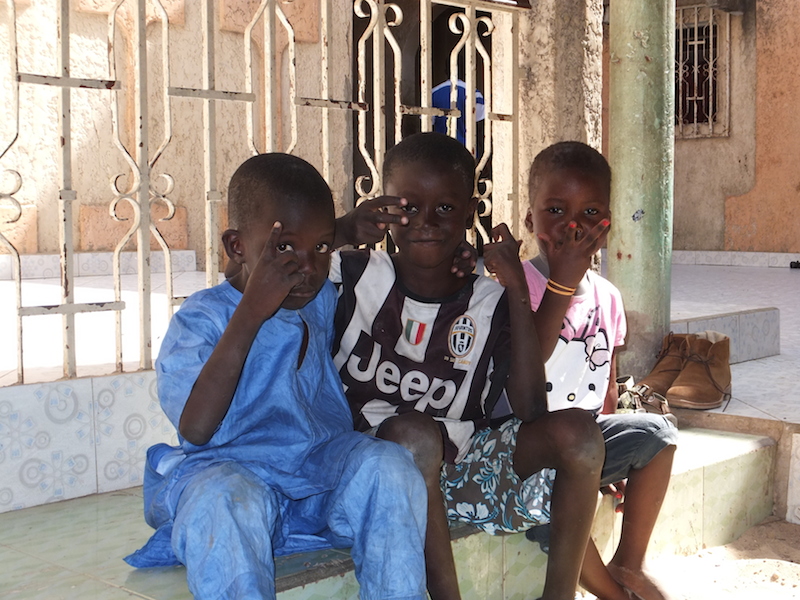 Lunch in a Senegalese Home

Lunch in a Senegalese Home

Back in St. Louis, Ismaila took us to his house for lunch.

We walked into a courtyard where he took us into a room with four women sitting and watching TV. We exchanged greetings and introductions and smiled at each other. One woman was braiding a young girls hair, the unbraided part was a tangled mess. The girl was in some pain, in tears at one point, but the finished part looked really good. Finally mom gave her a break and she left the room.

Ismaila came and got us and took us out to the courtyard where kids were playing, a goat was tied up, women were doing housework. We sat under this thatched roofed area in the courtyard with a sand floor and a mattress with a couple of pillows. Ismaila invited us to sit down and make ourselves comfortable. There were flies everywhere, but they didn’t land on us too much. Ismaila offered us drinks, Maria had water and Nick and I foolishly had Coke, which of course, the flies loved. There was a sheep tied up in the courtyard.

We sat, the kids shy at first, but then coming up and checking us out and interacting with us. Ismaila explained that there were 21 in the large house, 11 kids and 10 adults, including his father’s two wives – he has divorced the other two. The house is large, two stories, with rooms off the large courtyard.

We weren’t treated as special guests or anything, it was like we were just three more people in the house. Various people came to talk briefly with us, the kids played games, guessed whose shoes belonged to whom. Ismaila introduced us to his wife, who seemed shy and we didn’t see much of her. It was so casual that at one point a young woman walked across the courtyard wrapped in a towel, obviously just out of the
shower.

After about an hour during which we chatted briefly with the household members and got to know Nick better, Ismaila brought out a tablecloth, which the four of us sat around, on the floor. He asked if we wanted to eat Senagalese-style, with our hands, but anticipating our answer, he passed around spoons. Then he brought out a large, round, shallow bowl with a flat bottom, took off the cover and revealed a big platter of Thiboudine, a typical West African dish of stewed rice, brown with spices, with a big chunk of fish (Capitaine) in the middle, a large carrot, half an eggplant, a scotch bonnet pepper, a hunk of yuca and a baseball-sized squash, all of which must have been stewing all day. We all ate from the same bowl, it was really delicious. The rest of the family was in two groups, each with their own, larger common dish. For some reason, the flies did not go for the food, maybe the heat or the spices kept them off. It’s watermelon season here, so that’s what was for dessert. The flies had no problem with watermelon but at least they concentrated on the drops that fell to the sandy floor.

Afterwards, one of the teenage boys cut all the watermelon rinds into little pieces for the sheep while another made tea. The tea making was a long, involved process where he added tea, then water to the boiling kettle, poured out little glasses, poured them from one glass to the next, then back into the pot, added water, added mint leaves, repeating the process for at least 15 minutes. The tea was kind of bitter. A typical Senagalese beverage.

We hung around a while longer then it was time to go. Ismaila had changed out of his birdwatching clothes, we figured he was ggoing to be hustling his next job. We said goodbye to the family, got into a taxi and drove to the center of St. Louis for a caleche ride.