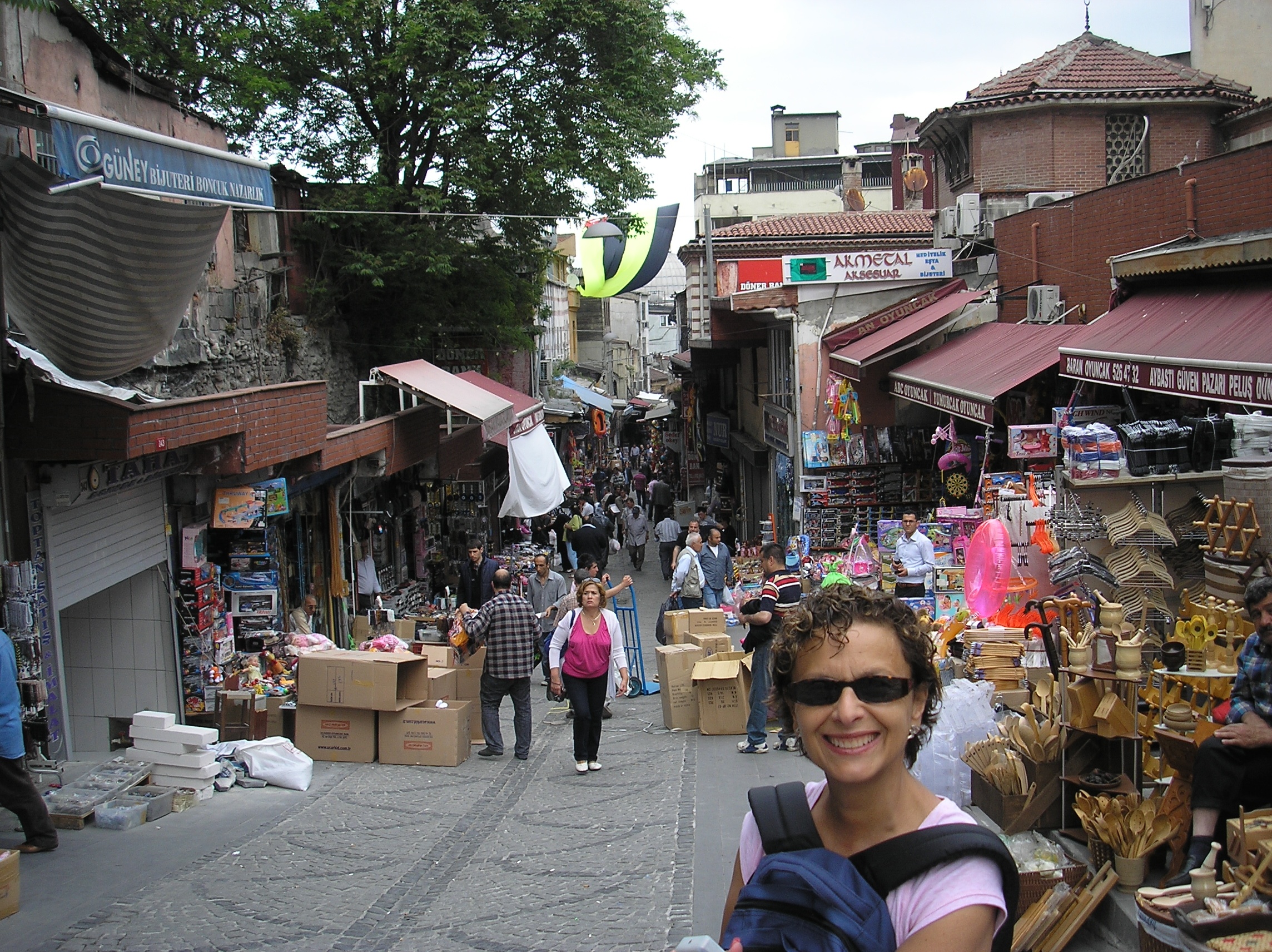 A few short blocks away from the Istanbul Hippodrome is the Grand Bazaar, supposedly with 8000 shops. We were expecting / hoping for a rat’s nest of confusing narrow alleys packed with vendors selling all sorts of stuff. Like this: But instead we found a shopping mall: We did stop in to a leather shop, where Maria tried on some really beautiful red and black leather jackets, but could not find a size that worked. Upon exiting, we got a little bit of half-hearted hustling from the other leather vendors, but not the true Middle-Eastern harassment that is really part of the experience. We headed straight for the back exit where we found a “real” shopping area. Lots of commercial activity, little closet-size shops. Many wholesalers here, if you want to get into the knock-off business, you can get the labels you need.

As we strolled down the street, we picked up a tea set, a belt, a bunch of Nazar Bonjuk anti-evil eye charms, then ended up in the Egypt Spice Bazaar which had all sorts of food merchants. We had a list of ingredients from the cooking class and stuff that we like: Turkish tomato sauce, Turkish chilis (no seeds, so the bite is milder), Turkish sweet red pepper paste, really good sun dried figs, tomatoes, apricots and the best dates we have ever tasted. We got a lot at one shop, who vacuum sealed everything for us. This stuff earned us a close look at customs, but they let everything in.

Our backpacks were heavy, but we were at the Galata bridge, so decided to cross and go through the Tunel, an underground one-stop funicular. At the end of the line (3 minute ride), we were in the music store section of town. We were looking for a Darbuka, a Turkish drum. Several days earlier, we had stopped into a music store near Sultanahmet and found a medium-size aluminum drum with the characteristic metallic pop for 30TL (about US$18, really cheap – we thought he may have been using Euros, but no, it was lire), so we had an idea of the market. The leader on the Black Sea tour suggested we try the Tunel square music shops. We stopped into several and in one found a beautiful copper drum with a leather head for 100TL. We also got an aluminum body drum with a mylar head for around 40TL, more than the other shop, but we were right here…