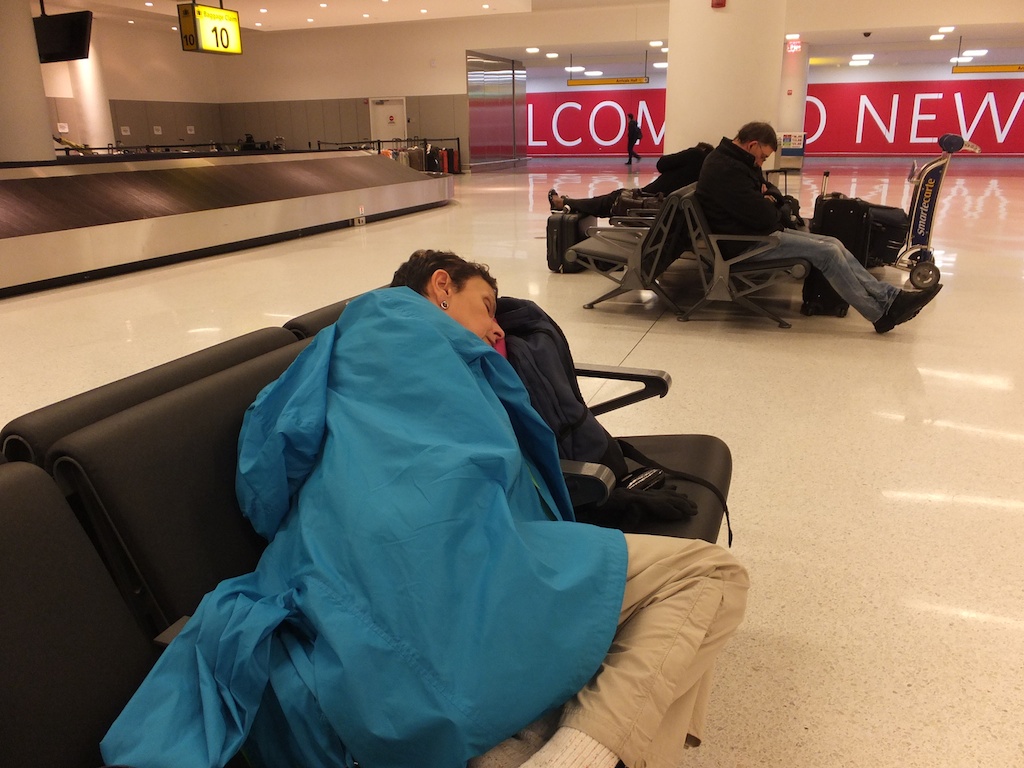 We left the gate at Boston on time, but it was snowing.  The plane was in de-icing when they announced that JFK had just closed and we were going back to the gate to let anyone off the flight who wanted off.  Back at the gate, Delta did not have anyone to get the people or their luggage off, so we sat.  Then they announced JFK was back open.  But instead of leaving, they waited around for a couple of hours to get the dummies off the plane, then we had an hour in the deicing line, finally taking off 5 hours late.

On arrival at JFK, we ran through the long jetway they use for the small jets only to find the entrance to the terminal was locked.  Once inside, we ran to Air France in the next terminal only to discover that they wouldn’t print boarding passes, the flight was closed.  We ended up spending the night at baggage claim in JFK, then got on a shuttle to La Guardia for a flight to Dulles where we got on a South African Airways plane to Dakar.  The flight DC to Dakar was rough in spots, but good service and on time, that is, 24 hours late.

We had to “buy coffee” for the immigration guys to complete our visa.  We discovered long after our reservations were made that Senegal had added a visa requirement just last summer.  We scrambled, and got the first part done online through a third-party agency, but still had not received the “approval” from the embassy.  So when we arrived we went to visa processing where they noted that we had no approval.  I mentioned that we had been told we could complete the approval on arrival and the guy asked me if I like coffee.  I said yes.  So he said I could buy him coffee.  “How much does coffee cost?”  “$10”.  Unfortunately, I only had a $20 so I couldn’t try to negotiate both Maria’s and mine for $10.  Approval granted!

The B&B is a little rough.  We arrived to no power, but all we were ready to do was sleep in a bed for a couple of hours. It just came back, so we can finally let you know we’re alive. It’s unseasonably cold, in the 60s.  We’ll see how it goes… Off for some sightseeing now.